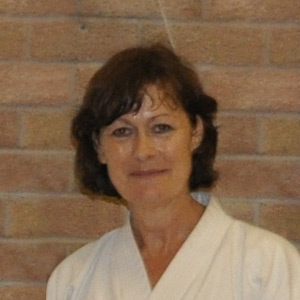 Sensei Julie has been training since 1994 and graded to 4th dan in 2015 under the scrutiny of top Instructors; Takenori Imura 8th dan, from Tokyo, Kazuhiro Sawada 7th dan, from Belgium and Yoshinobu Ohta 7th dan, from England. She started training under Sensei Gary Scammell when her 2 sons wanted to learn karate and soon became hooked. Julie's 2 sons and her daughter all progressed to black belt with her son Jack still training and becoming one of the youngest JKAE students to be graded to 3rd dan. Despite starting later in life Julie has participated regularly at National and International courses and competitions particularly enjoying kata (form) which she feels encompasses all aspects of the art. Her motto is : Anyone can be cool but Awesome takes practice! (With that in mind she says she has many more years of practice ahead). 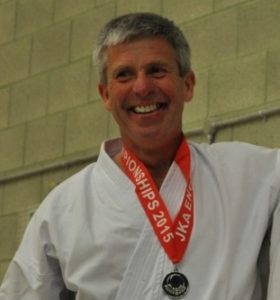 Andy Started his karate journey in 1979, by chance being invited to go along with a couple of friends to the Woking Tora KUGB club, run by Sensei Michael Beach and where he met his wife Jayne (1st Dan retired!) .
Reaching 1st Kyu there under Tomita Sensei ,then passing 1st Dan under Enoeda Sensei and after attending one of the rigorous KUGB Crystal Palace National courses in the early 1980s, he decided to train at Kawasoe Masao Sensei's Earl's Court dojo in London, where he became a longstanding member of the kata and kumite teams, grading to 2nd Dan in 1989.
Andy regularly competed at the Southern Area Championships in Poole and at the KUGB National Championships, Crystal Palace, where he gained a bronze medal in the team kata in 1986. He also fought in many "friendly" international matches against visiting teams from among others, Wales, Scotland, Italy and Japan.
He returned to Karate training in 2008 in the Mendip Hills, with son Fred (1st Dan) after a 14 year break due to family and work commitments and graded to 4th dan in 2015. Andy is knowledgeable in all aspects of karate and has recently been successful in both kata and kumite at national level gaining silver in kumite in 20015 and gold in kata in 2016. A traditionalist, Andy aims to bring the true spirit of karate to his lessons.
FAVOURITE TECHNIQUE: Mae Geri
FAVOURITE KATA: Bassai Dai
MOTTO: Spirit first, technique second!
LIFE OUTSIDE OF KARATE: Andy enjoys running a small farm with his wife. 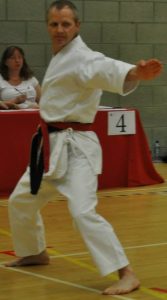 Pete started his martial arts training in 1985 practising a different style until 1989. When he moved into Chilcompton Village in 1998 he decided he needed to get fit. Pete found Mendip Shotokan Karate Club were active in the Village Hall, so he started training again in 2000 under Sensei , Gary Scammell.
He achieved Shodan in 2010 after 10 years of training. Pete said, "although I didn't attain shodan as quickly, compared to some, I didn't start training to try to speed through the grades, I train because I enjoy just improving my techniques and gaining more knowledge each week. You never stop learning."
Pete is now working towards his 2nd Dan and has competed in both club and National competition, in kumite and kata. 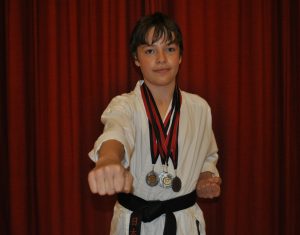 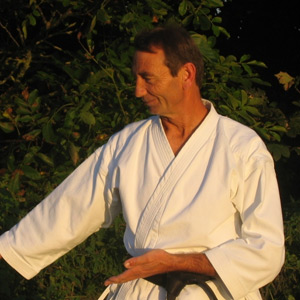 Our instructors are all qualified coaches with the japan karate association england (jkae) and have enhanced disclosures and insurance.